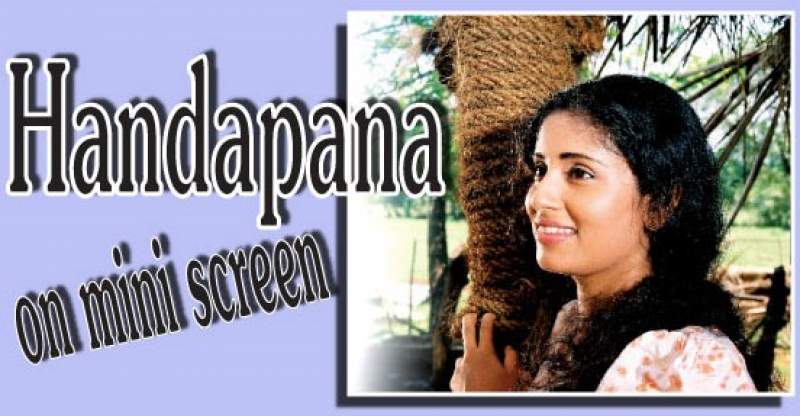 The entrancing Sinhala tele drama, ‘Handapana’ (Moonlight) was screened on Rupavahini in Sri Lanka in year 2011.

The drama series gained a wide ranged public acclamation for its magnificent presentation. ‘Handapana’ was a Sinhala novel transcribed by veteran novelist W.A. the Silva many decades ago. This became one of the very famous romantic novels among readers that time, and gained massive attraction soon.

In nineteen sixties ‘Handapana’ story was used as a plot for a Sinhala film because of its soothing story. The film was directed by Kingsly Rajapakse, one of the famous film directors in Sri Lanka at that time. Film’s cast included Herbert M. Senavirathne, Vijitha Mallika, Piyadasa Gunasekara, Ruby de Mel, and Cyril Wickramage the top stars in Sri Lankan cinema during that era. Thus the story went into the annals of Sinhala films, as one of the successful films produced in Sri Lanka.

After few decades, the film was converted into a tele drama sequence with a novel cast. It was not that easy to match the old popular film. But the newest cast overcame all challenges and the drama became a hit, gaining public acclamation and reaching the peak of popularity indeed.

Handapana (Moonlight) story is centered on a family in a remote village, revered for its simplicity and virtuousness.  Kusuma is a virtuous beautiful educated girl.

The notorious thug in the village known as podi ralahami tries to win her heart by force, using his power. Kusuma retreats his indecent proposal. Podi ralahami is furious for being rejected and decides to abduct her on a moonlit night, with the support of his gangsters. Peter, a relative of Kusuma too is fond of her and intends to take her hand in marriage, with the blessings of Kusuma’s parents. Kusuma’s parents go for a charming ceremony in the village one night, leaving Kusuma alone at home with their housemaid who pretends to be loyal to them. The crafty wicked housemaid accepts the contract of delivering Kusuma into the hands of her adversaries the same night while she is asleep. The abductors draw their final plan to steal Kusuma at midnight with the support of the opportunistic housemaid. As a forerunner, a spy is sent to the spot by podi ralahami, followed by his gang to bring Kusuma out from the house safely tied in a gunny. The forerunner is confused with excitement and faces an unexpected horrendous event inside the house!!! The abduction takes place, but the plot becomes a folly in the next moment when it is revealed that the kidnapped was not Kusuma but the old housemaid in the gunny tied instead!!! Furious and disappointed podi ralahami goes mad and keeps the housemaid and the main gangster hidden with death threats to hide his crime. Soon he realizes that some mysterious hand had been at work behind the events taken place. Kusuma is mysteriously saved from abduction by an unexpected stranger. He revives her senses and tells her how he happened to save her from the evil plan, and assures her safety. Mystified Kusuma is lost in excitement. The stranger poses himself as Charli and hands Kusuma to her shocked parents and resigns to anonymity. The night was a moonlit night!! Kusuma recalls all what happened. Her emotions are haunted by these strange happenings. Podi ralahami executes terror in the village and hunts after the mysterious person who destroyed his evil plan. Kusuma’s parents are stunned with anxiety. Time passes thus.  Suddenly Kusuma meets Charli in the bazaar and learns that he is homeless. She invites him to their home, with the promise of an employment. Charli accepts this call and goes to Kusuma’s house, and hires himself as a servant. He becomes a faithful servant of Kusuma’s parents. Village folk become suspicious of Charli’s appearance in the village, and of his mysterious behavior. Charli discovers that it was podi ralahami who planned to abduct Kusuma that night. Peter is upset about Charli’s presence in Kusuma’s house. Amidst all these speculations, Charli goes on with his work. Impressed Kusuma becomes emotionally close to Charli and treats him with affection. Kusuma’s curiosity increases day by day and begs Charli to reveal his past. But he keeps silent and comes out with vague answers, saying only that he is hopeless and homeless and orphaned. Charli is fascinated by Kusuma’s genuineness and concern. Kusuma’s compassion increases day by day. Frustrated Peter seeks ways and means to chase Charli away from Kusuma’s house, fearing that he will lose Kusuma because of Charli. Amidst all tensions, podi ralahami goes missing from the Village, and his elder brother loku ralahami comes in search of this sudden disappearance. Some villagers conspire to destroy Charli for no reason.  Loku ralahami and village thugs too are after Charli. Meantime Kusuma’s parents insist that she marry Peter soon. She refuses to do so and parents suspect that Charli is the very reason for this indifference. Pressurized parents decide to send Charli off from the village, thinking of Kusuma’s future. Charli leaves the village with dismay. Kusuma becomes frustrated with all these happenings.

Wondering Charli appears in his ancestry home in the city and mysteriously reveals his identity to its caretaker after so many years.  – He was the wealthier Sena Galapatha the heir of this ancestry home, left for far distant isles for bitter reasons disguising himself as a vagrant!!! Charli reveals to his closest friend what happened to him. He is determined to visit the remote village where he had been so far secretly, and seeks his friend’s help. Sena Galapatha leaves for where he was before with his friend and it was once again a moonlit night!! Sena Galapatha reaches Kusuma’s home at night, and fetches Kusuma secretly to his ancestry home. Kusuma’s parents go on searching her everywhere wailing and weeping. Their imaginations run riot.

Kusuma is shocked to realize that Charli had carried her away from her home at night and is stunned with fear and confusion. Kusuma’s parents learn that it was Charli after all had taken Kusuma away, and he was not Charli, but well reputed Sena Galapatha who was in disguise!!!  Kusuma is surprised to know who really Charli was with all bewilderment!!! Charli repents for hiding his true identity from Kusuma all through. Kusuma expresses her willingness to take Sena Galapatha’s hand in marriage. Finally Kusuma marries Sena Galapatha with everyone’s blessings including Peter and loku ralahami where the story comes to an end. The moonlit night created a significant background for Kusuma’s and Charli’s destiny after all.

It is noteworthy that the tele drama was more centered on the original novel of W.A. Silva more than the film script. The drama reminds certain social structures that prevailed rather in mid nineteen fifties in Sri Lanka. Certain superstitious beliefs and practices of old village folk in the past also become a part of the story with a touch of humor that is charming and soothsaying ceremonies to  win women’s love, diabolical possessions, devil dances, ghosts and personified demons to get rid of fear and so on!!! 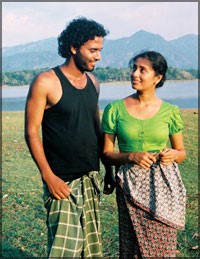 The tele drama series was directed by Sirithunga Perera and was produced by Upajith Lal Balasooriyararchchi. Ranjith Jayasooriya had done the screenplay while Vijaya  Yapa Bandara had handled the camera. The mesmerizing melodious music had been directed by veteran music genius Sarath de Alwis, which raised the drama into high spirits. The theme song was sung by Sashika Nissansala. The drama was a presentation of Active Tele Films.