Review - ‘Varamali’ a sensitive story of a family 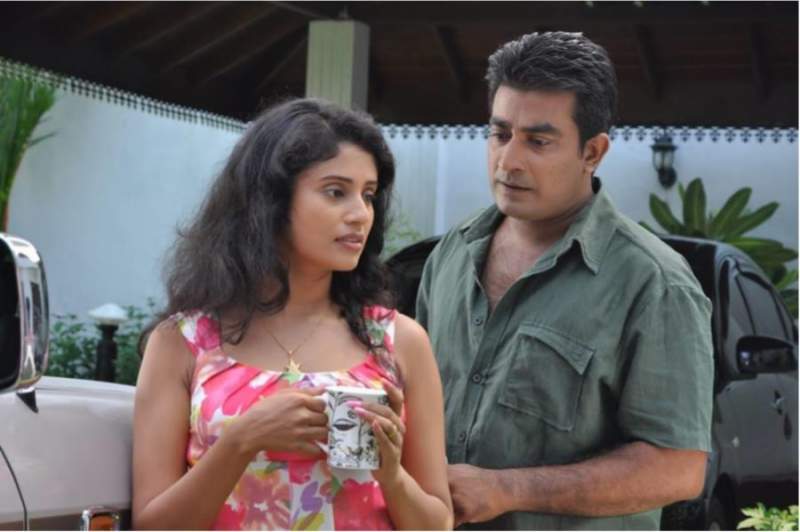 The drama won people’s hearts for its sensitivity and extraordinary theme. The story was family-based and conveyed a profound message to all families, especially for young husbands and wives. Varamali was so natural to people, as it realistically showed family issues in society today, struggling to shape their lives up, in the face of social traumas and challenges.

The drama showed how even a love bound family could ruin itself if mutual understanding is overpowered by evil elements of suspicion. The nuclear family will stand firm in the face of adversaries and all external forces of destruction when mutual sharing and understanding become a vital dimension in the family institution, beyond mere concepts based on shallow preoccupations. That is what ‘Varamali’ story is all about. The script was good, though the end of the story was a bit anomalous!!

The storyline revolves around an ambitious husband emotionally disturbed with suspicion and scrupulously worried about his power and position and wealth, and a virtuous sublime wife who is ready to sacrifice everything for the sake of her husband and two children, with deep fidelity.

Devaka and Amaya are husband and wife with two small children. Devaka is holding a top position in a leading establishment, and maintains a high social profile. His wife Amaya supports him in everything as an exemplary wife.

Devaka at times is restless and is over-anxious about his job and future prospects. Amaya always gives him insights and motivates him to be just and upright in his work. Devaka tries to handle his subjects diplomatically for his own ambitions.  Amaya patiently listens to his plans, but wisely advises him to be sensitive and human-centered as a leader, and to have a sense of understanding towards others. Amaya is a pillar of strength to Devaka, as a faithful wife.

The company Devaka working for belongs to a rich company owner. Nethu, his daughter is lame though beautiful and young, and assisted by a family helper. They lead a luxury life. Nethu is the heir to the inheritance of this rich owner. Deveka is well aware of this truth!

Gokula is an employee, working under Devaka. He lives with his wife Ransimala, and son. Pahan, Ransimala’s brother, leaves his ancestry home in upcountry with frustration after his mother’s death and comes to live with his elder sister. Pahan is welcomed by his sister, Ransimala. He is trying to settle himself in his sister’s house.

But his behavior is ambiguous. Gokula and Ransimala soon realize that Pahan is not normal in his behavior, and attribute this status to his mother’s death.

Pahan soon gets into the habit of leaving home silently. He starts spending long hours in a public library. One fine day, he meets Nethu there in an unexpected encounter. She is none other than the daughter of Devaka’s boss. This new experience haunts Nethu who is depressed about her own fate. She thinks of this incident often and becomes interested in him. Pahan too pities her and begins to like her. She begins to meet him in the library frequently and learns that he is redundant and lives in a kind of a depressed state.

Moved with pity, Nethu promises to help Pahan and pleads her father to employ him in her father’s massive company. The father agrees and influences Devaka to accept him to the company. Seeing young handsome Pahan, Devaka becomes fretful and suspects that he is having some relationship with Nethu. This troubles Devaka, as he is having a hidden agenda to own this company for himself in future. He shares his doubt with Amaya and Amaya advises him not to imagine unforeseen issues.

Devaka offers a job to Pahan, as there was no way for him to escape.  Pahan tells his sister that he had found a job, but does not reveal any details. His sister is suspicious about this move.  Pahan and Nethu’s emotional relationship continues. Gokula and Ransimala are suspicious about Pahan’s conduct and his strange movements. They discuss among themselves about Pahan’s mysterious engagements and his outlooks. Their suspicions increase day by day and both keep watch over him. Devaka too notes Pahan’s conduct in office and his emotional disturbances and is puzzled with his nonsensical behavior.

One day, Pahan while on an outing, suddenly spots Amaya accompanying her children to school. Stunned with this unexpected scenario, Pahan runs amok and starts following her vehicle instantly not exactly knowing who she is!!! Driving her vehicle alone, Amaya soon realizes that she is being followed by an unknown person. She somehow escapes and reaches home. Pahan continues to follow Amaya in a series of events but never meets her face to face. Reason for this following remains mysterious.

One day, Devaka forgets to take some documents to the office, and sends Pahan to his residence to bring those documents. Pahan finds the house, and peeps in with curiosity. The domestic sees him and requests him to sit until the documents are brought down. Next moment he suddenly spots a family photograph of Devaka, Amaya, and children. Pahan trembles with this unexpected event and loses his senses. He takes the photograph into his hands and gazes on it nervously. The photo hurls down with a thrash!!! Pahan flees and disappears. Amaya is astonished by the incident and is surprised to see the broken photo on the floor. Devaka is puzzled with the incident, and tries to reason out the series of events. Amaya too is trying to make sense of what happened.

Pahan’s behavior becomes enormously mysterious. He spies all movements of Amaya and follows her throughout on the sly. Amaya realizes that her movements are being followed by an unfamiliar person and tells Devaka about this nightmare. Devaka too becomes restless and tries to seize this maniac with the help of his decoys.

Pahan spends sleepless nights and this is noticed by Gokula and Pahan’s sister, Ransimala. Pahan draws a picture of Amaya and manages to slip that into her car one day.  Devaka’s mother discovers this photo and hands it over to Devaka with overwhelming curiosity.

Meantime Devaka observes Pahan’s frequent absence in office. He tries to fathom matters and reason out Pahan’s tricky movements. One day in Pahan’s absence in office, Devaka is lured to have a look at Pahan’s drawer. What is found there, are some drawn pictures of Amaya!!!.

Devaka’s tensions increase and he begins to suspect Amaya with jealousy, presuming that she is deceptive. He begins to follow Amaya and deploys some men to spy Amaya’s movements. Devaka becomes indifferent to Amaya and keeps away from the family. Amaya unable to bear such rejection falls into a mental agony. The family begins to shatter. Traumatized Amaya, makes all attempts to prove her innocence. But she is not listened to by Devaka and his mother. Devaka’s mother tries to solve matters and reunite the family.

One day Pahan in a bid to follow Amaya, sees her car parked. He approaches the car and opens its door in a flash, shockingly to find Devaka’s mother there!!!  Pahan flees the scene and disappears completely. Devaka’s mother begins to suspect Amaya and accuses her for being insincere. Desperate Amaya patiently bears all insults for the sake of her children.

Meantime, Nethu, distrusts Pahan and chases him away from her presence, due to a misunderstanding. They break off, but she is remorseful for being so rude to helpless Pahan.

Devaka becomes mentally distressed and decides to live separately. With unbearable pressures, Devaka leaves Amaya and two children. Under the pretext of going abroad, Devaka goes to live with a friend and tries to spy Amaya’s movements. Amaya tries to trace his whereabouts. Probing into Devaka’s plight, his friend suggests him a counseling encounter. Devaka suddenly sees Pahan following Amaya, and he too gives a chase.

Next moment Devaka finds Pahan with a psychiatric where he is being treated for a mental disease!!!  Pahan was a maniac after all. Devaka begins to realize that he was too quick for prejudiced conclusions and had not acted thoughtfully.

Finally, it is revealed that it was Amaya’s appearance that disturbed Pahan, as she exactly resembled Pahan’s mother who was no more!!! It was this resemblance that moved Pahan to be notorious and to glimpse Amaya all over, which led to the downfall of a beautiful family after all. Devaka too realizes that he was wrong in his perceptions!! Devaka is brought to the realization of the dangerous consequences of suspicion. Devaka and Amaya unite once again.

Manjula Kumari played the lead role with her evergreen acting prowess, which brought limelight to the entire creation. She brought the core of the storyline to the highest esteem with her sparkling dynamic enactment together with Bimal Jayakodi, her counterpart in the drama. Her virtuous role was acclaimed by all viewers.

The drama features Manjula Kumari and Bimal Jayakodi in lead roles together with Sheril Décor, Pathum Rukshan, Manel Wanaguru, Ananda Wickramage, Giriraj Kaushalya, Meena Kumari, and many others. The theme song was composed and sung by Ruwan Hettiarachchi. P. Welikala directed background music. The drama was directed by Shantha Soysa.