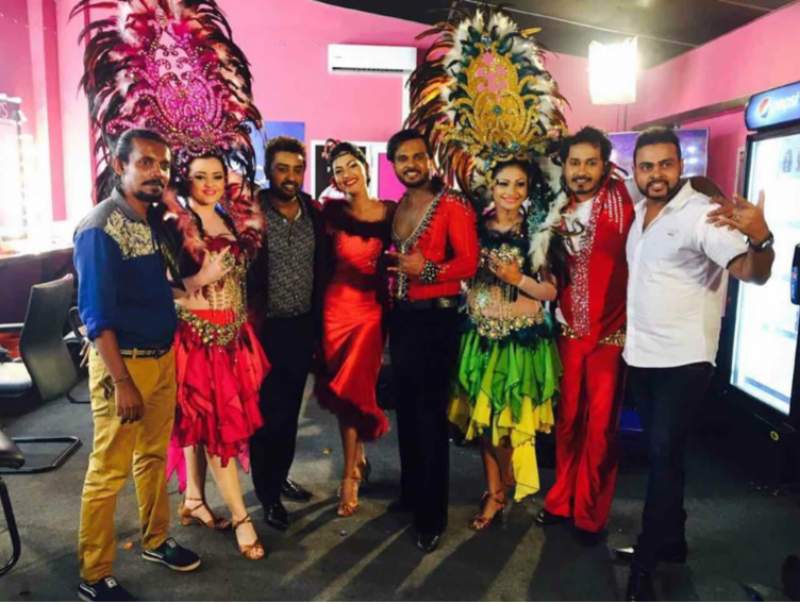 The Talk of the Town these days is about Hiru Mega Stars.

Television fans all over the world, especially in Sri Lanka are given the privilege to encounter this newest reality experience every Saturday night on Hiru Television Network. Five teams with sophistication compete for the victorious championship of this novel Mega Event. Thus this eulogy is to salute the team RAVANS, the event’s center of attraction.

Fabulous team Ravans headed by Suraj Mapa, mesmerizes its fans and spectators with stunning dancing, singing, and acting sensations, highly unique with incomparable dimensions. Ravans’ movement exaggerations are sharp and sparkling, and dynamic. Suraj Mapa and his high caliber team come forth with inimitable variations on stage, stunning its audience with absolute amazement.

With glamour and grandeur, Suraj Mapa sensationalizes the dancing items of Ravans delving himself and his partners to touch the depths of dancing multimodalities and tonalities in diverse dancing styles with tinges of Latin American and Kandyan dancing. Suraj Mapa is a renowned star in Sri Lanka who has reached the pinnacle of stardom. He has acted in numerous television dramas and films of different genres and has left an indelible mark as a Super Star.

Romesh Sugathapala sweetens the audience with his melodious voice tones, that which transforms the audience to ecstasy; classic examples for this is the hit numbers sung by him for Super Battle Round in many episodes with novel imbuements of classical note ranges, which amazed the audience and thereby won the Golden Buzzer on many occasions during the competition. Descending from a lineage of musical heritage, Romesh Sugathapala mastered himself further in Western and oriental music. He emerged as an instrumentalist, composer and a vocalist thenceforward. His songs became very popular especially among young music fans, as they had unique overtones with soothing tunes. Romesh Sugathapala is a vibrant star on Hiru Mega Stars stage.

Veteran famed actor Sarath Kulanga is not a stranger to Sri Lankans. Sarath Kulanga is an actor par excellence. His role play in drama, films and tele vision dramas, is inimitable and exceptional. Sarath Kulanga has been a teacher of the government sector for thirty years in the field of music and drama, where he manifested his proficiency eloquently, illumining aesthetic skills of his pupils all the time, as a humble dedicated teacher. Panadura Sumangala Vidyalaya is one of the places where he rendered his service, as a teacher.
Givantha Arthasad enhances the spirt of Ravans with his splendid performance in dancing, singing and acting. Popular celebrity Oshadi Hewamadduma’s embodiment in Ravans adds colorful essence to the team with exuberant modulations. Oshadi Hewamadduma has played pivotal memorable roles in many television dramas and films with her dynamic acting skills. She is a fascinating dancer with entrancing movement exaggerations.

Bubbly actress Tharuka Wanniarchchi brings limelight to Ravans with her dancing and gleaming sparkly expressions that which hypnotize the audience. She is a famed actress in Sri Lanka and has played charming pivotal roles in many popular television dramas in Sri Lanka. Suraj Mapa – Tharuka Wanniarachchi fixture is applauded by spectators with high esteems. Sensational actress and singer Muthu Thranga’s presentations on Hiru Mega Stars stage captivate all viewers with emotional dynamisms. Muthu Thranga is one of the most sought stars in Sri Lanka as well as abroad. She has performed as a superb dancer and a singer in many countries. She captivates the audience with her melodic voice always. She has played unforgettable key roles in many popular television dramas and films in Sri Lanka, as an esteemed actress.

Sparkling dazzling costume varieties and assortments of Ravans in each episode are superbly colorful and fantastically amazing. Amila Udaya, the costume designer of the team, is credited for his extraordinary fashioning that boosted the colorfulness of Ravans with novelties. Efforts of Sanka Prasad, the Choreographer of Ravans reach summits of perfection, as his directions for movement exaggerations of the team are tremendous. Sanka Prasad deserves praises for creativity. The team Ravans is fabulously creative.

The Panel of Judges of Hiru Mega Stars comprises experienced veteran artists in Sri Lanka. Gigantic film personality Ravindra Randeniya, evergreen celebrity Sabitha Perera, dancing and acting personage Dilhani Ashokamala, scrutinize and pore over the performances of Hiru Mega Stars competitors on stage with their transparent supreme impartial judgements. Thanks to them for their commitment and insights. The reality program Hiru Mega Stars paves way for aesthetic lovers in Sri Lanka to learn and inculcate new trends and styles and scopes in drama, music, and dancing arenas in many proportions.

Hiru Television Network has been innovative throughout its presentations. Hiru Mega Stars is its magnified invention. It is a new experience after all for all television viewers. Hiru Mega Stars program provides a stunning sensation to its viewers with an enormous colorful entertainment. Unreserved creative assistance of crew behind the screen is astonishing. Thanks to Hiru Television Network in Sri Lanka.

The concept of king Ravana in history is a popular belief. Thus the etymology of the term RAVANS connotes a sense of power and majesty, as epics and legends related to the king reveal. It is this popular concept that the team Ravans wishes exhibit to the whole world, depicting themselves as personae with a same vigor. Ravans invites all viewers of Hiru Mega Stars to be a part of them in their journey towards victory.

Let us wish all the best for Ravans, as they walk towards Hiru Mega Stars Championship with infinity.