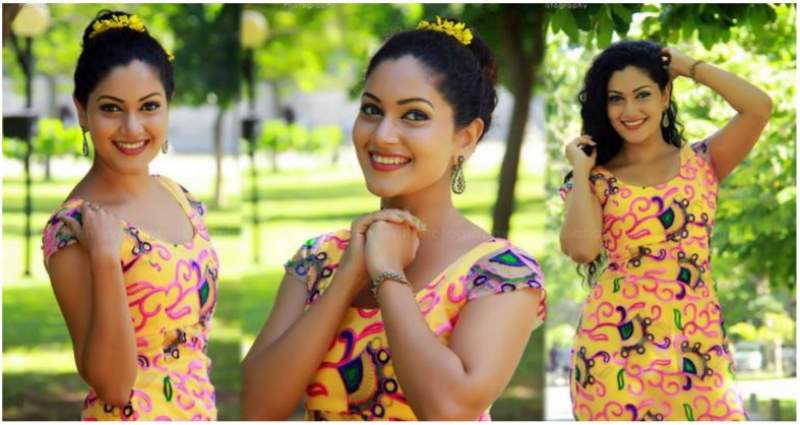 Articles, reviews, interviews, expressions write-ups have been enormously frequent on media of all ranges and social media platforms in the recent past to acclaim and exalt the evergreen classic superlative celebrity Tharuka Wanniarchchi, which praises and esteems she absolutely deserves.

Let this concise review also be a contemporary eulogy thus, for the opulent impact she had endowed inspirationally on Sri Lankan television dramas, movies and television reality shows along with her other interventions and commercial endorsements with her sensational enactments. Tharuka Wanniarchchi made her debut in the small screen with the famous television drama, ‘Suba’. Thus she began her career as a superlative archetypal actress. As a renowned actress in Sri Lanka, Tharuka has played charming pivotal roles in many popular television dramas hitherto. Tharuka Wanniarchchi has established herself as one of the leading celebrities in Sri Lanka and is acclaimed for her performances, charming beauty and accomplished dancing modulations. Tharuka with intensity bestows a unique startling eye-catching chemistry on screen and stage in her presentations. To cite some of her creations here, ‘Kawrunda Nuba Mage’ screened on Hiru Television Network some time ago, was a colorful tele drama with Tharuka’s idealistic acting sensations. Her acting variations surpassed all characters in the drama. ‘Devi’ was a drama based on countryside superstitious beliefs with chanting, diabolisms, devil dancing and hauntings. Tharuka’s roleplay in ‘Devi’ was distinctive as a charming countryside girl.

‘Paththini’ was a significant tele drama series screened on Hiru Television Network in recent times, where Tharuka’s character revelation was magnificent, as her character was the core of the story. Tharuka poured her spirit into the role she played with modesty and docility. Success of her creations, cinematic and television is ascribed to her high-spirited distinctive expressions as an actress with perfectionism.

The movie became popular for its richness, especially with Tharuka’s fascinating performance. Professor Sunil Ariyarathna had done a perfect job, as director par excellence. Tharuka Wanniarchchi played an unforgettable role in ‘Ali Kathawa’. He was wise and prudent to choose Tharuka to play a pivotal role in the film. Tharuka received rave reviews with applauses for her unique acting sensations with children and also elephants.

The movie was upheld for its sensitivity and richness. Story was proportioned between human-animal relationships – a difficult task achieved by Sunil Ariyarathna. Tharuka played the lead role in the movie, as a queen, wailing and weeping for not being blessed with children. Tharuka did extreme justice to her character, that which brought limelight to the story. Tharuka Wanniarchchi was Professor Sunil Ariyarthna’s finest choice to suit the gleaming role of the innocent queen portrayed in the storyline of ‘Ali Kathawa’. 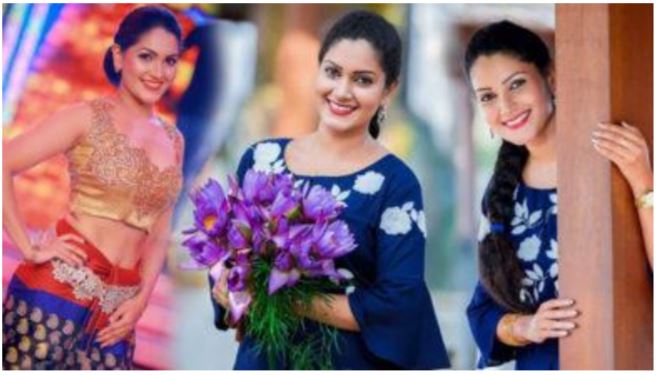 ‘Nela’ the Sinhala movie, screened in Sri Lanka recently was a film of Bennett Ratnayake. The storyline was based on a Spanish novel, Marianela. The plot revolved around the concept of internal and external beauty in philosophical perceptions, in line with Socretice’s thought. Tharuka Wanniarchchi played the role of Isabella in the film with her artistic star prowess plus charming beauty, which brought the film into limelight.

Tharuka was credited for the role she played in ‘Nela’, as she did extreme justice for Isabela’s character, depicting the real literal sense of the character. ‘Tawme Iskole’ (City School), was another standard Sinhala film that discussed the plight of a child victimized in a new school setup in the city. Tharuka’s main role as a caring mother in the face of injustices and adversaries in the story is inimitable.

Reality Shows on Television channels are a common feature in contemporary times. They vary in fashions and are diverse in scopes. Hiru Mega Stars I was one of such extravaganzas, to remember.

Hiru Mega Stars I became very popular among television fans because of its novelties and embellishments. The competition had five teams with reminiscent titles. ‘Ravans’, headed by popular stardom, Suraj Mapa, was one of the innovative teams there with fabulous creations. Ravans was a group of seven mega stars in the fields of Sri Lankan film, television drama, and music and stage drama. 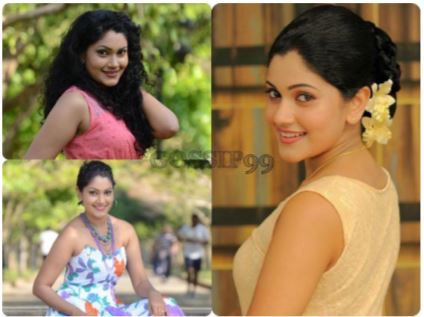 Hiru Television Network presented Hiru Mega Stars II with extravagance where 80 artistes performed on stage in pairs through multifaceted items with infusions of singing and dancing modules in a series of exciting events. Tharuka fermented her exuberant mannerisms in her ranges of performances with utmost brilliance, paring herself with famous star Kavinga Perera. 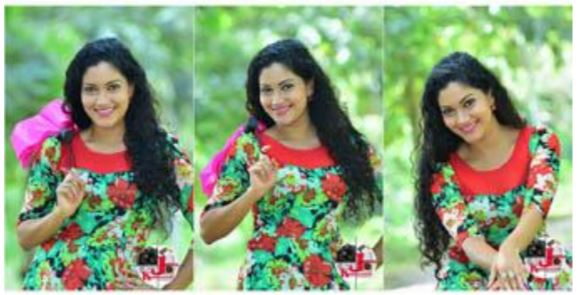 ‘Kela Handa’ was a very famous film screened in Sri Lanka in year 1953, directed by B.A.W. Jayamanna. ‘Kela Handa’ story was based on a Sinhala novel written by W.A. Silva, by the same name.

The story revolves around a village girl who meets a young rich gentleman at a religious festival who was disguised as a man of low class. ‘Kela Handa’ was a landmark in Sinhala Cinema annals for its cast, songs, and storyline, and acting of Rukmani Devi who played the main role in the film, as history proves. ‘Kela Handa’ is to be screened on television as a television drama, which is a remade of the old famous film ‘Kela Handa’ screened many decades ago in Sri Lanka.

Tharuka Wanniarchchi was offered the main role in the newest production to reenact the character once performed by veteran actress revered Rukmani Devi. This is amazing. This is the wisest choice of the drama’s director to have Tharuka to reenact great actress Rukmani Devi in ‘Kele Handa’. This new creation will be extremely successful with Tharuka’s sublime presence. 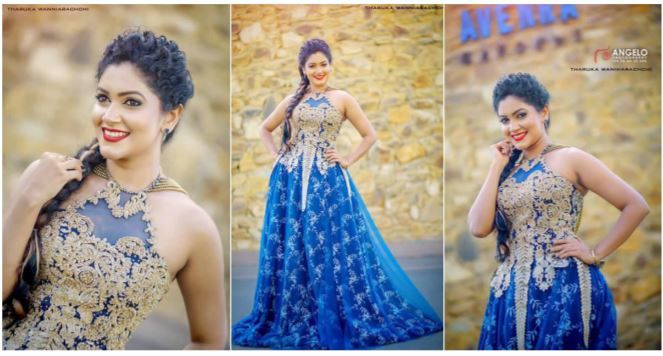 Tharuka Wanniarchchi has played virtuous characters in a series of single episode religious television dramas. The drama series, ‘Sasara Sevanali’ was inspired by Tharuka’s enlightened pristine portrayals that which transform all where Tharuka’s intrinsic religiosity is manifested.

Playing roles of an innocent religious minded blind young girl, selling flowers for devotees, a young Buddhist pious nun who converts a young man with her philosophy and wisdom to embrace monasticism, are two dramas to mention here out of the whole cloth.

Tharuka’s reflections reveal mystical dimensions in depth. ‘Urumayaka Aragalaya’ is a television drama, story of which, is based on patriotism during colonial times in Sri Lanka. Tharuka features as a brave patriotic heroine in the story where she faces imperialists and thus fights to defeat enemies. Tharuka’s role play is extravagant. ‘Blackmail’ is a television drama, where Tharuka plays a mystery packed role.

The story revolves around a seamstress, a paragon of innocence and modesties, still brave, upright, and vociferous – voice of the voiceless - a spokeswoman of the community – but victimized and oppressed and humiliated for standing for justice and rights of the downtrodden. The lead role, ‘Poddi’, is magnanimously fashioned by beauty icon, Tharuka Wanniarachchi with her noble superlative dramatic conceptions and ultra-sensitive role enactments. Tharuka pours her intrinsic essence to the character of Poddi with her infinite goodness, with an immersion to the story’s depth. 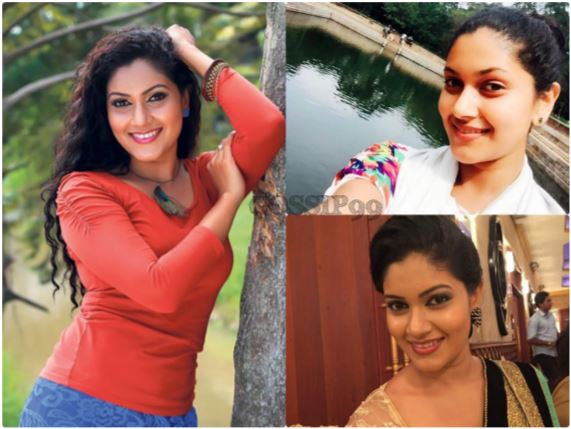 Tharuka intensely puts her counterparts to be at ease on screen and stage with a matrix of harmonization. Her acting is coated with spellbound richness. Tharuka Wanniarchchi is an elegant star personality Sri Lanka is blessed with. Her avid followers and fans are enthusiastic to see her in many creations, in entertainment programs, and prestigious films and television dramas always. Let us wish her all the best for all her endeavors, as a supreme celebrity with utmost humility.